Happy No Shave November, everyone! (not sure who came up with this…)

Since when is body hair gendered? Doesn’t it just seem logical that people are hairy? Warmth for winter, right?

Apparently if you live in mainstream America, the answer is no.

From a young age, girls are expected to shave their body hair – it’s been turned into a coming-of-age ritual, a tradition passed on from generation to generation. From armpits, to legs, to toes, to stomachs, to pubic hair – what’s left untouched by the razor?

And speaking of the razor, if you shave, do you buy Gillette? Venus? Disposable? Safety guards? Men’s, Women’s? Four blades vs. two? And what abut Nair? Or threading?

I started cutting my actual arm hair with scissors at age 8, when I thought no one was looking. I began shaving my armpits when I was 9. They were hairy, and I just remember feeling that it was unacceptable. My mom taught me how to shave in her bathroom. We lived in Utah.

A year later, I asked my mom if I could shave my legs? She told me no. Why was it acceptable to shave my armpits and not my legs? I threw a fit. Everyone else was shaving their legs. She let me begin shaving shortly afterward.

Hair became disgusting to me – absolutely repulsive. I felt that it was a growth that hampered my life.

I had stopped cutting my arm hair at this point, and at 13 I bought bleach. It was bleach that is made for body hair. I bleached my arms and was thrilled with the results, shocked if no one else noticed the improvement I had made to my body. My dark black arm hair was now a whitish blonde. I had made it disappear, like a magic trick, I thought.

It wasn’t long before the magic trick became dull. My arm hair wasn’t enough. Plus, had you seen how dark my stomach hair had become? Unacceptable, I thought. I had to get rid of it. It was a need, a thirst. I began including my stomach in my ritual-bleaching extravaganza.

After I’d been bleaching for a few months, a friend told me that when she bleached her arm hair and went to a school dance, the hair glowed under a black light. I couldn’t imagine. I had nightmares about this happening to me. How embarrassing, I’d thought.

I stopped bleaching, but couldn’t give up my hair’s mask. I couldn’t allow my hair autonomy and visibility. I began shaving my arm hair and stomach hair, in addition to my armpits, legs, and pussy. I even started shaving those few hairs that grow on each big toe.

My body hated me; she screamed. She cried out with screaming little red bumps. I tried to use creams to satisfy the uncomfortable razor burn; nothing worked, but I refused to stop shaving. Hair was gross, or so I thought. I even waxed my bikini line and thought the fiery bumps, like anthills sprouting across my skin, were better than hair could ever be.

Hair. Everyone has it. Hair has a purpose.

At 18, I went to college. I began attending F-word meetings, the feminist group on Florida State University’s campus. People started talking about No Shave November. They were pledging which body part they were going to stop shaving. I couldn’t imagine. Stop shaving? But then what…? Did these people still wear shorts? Tank tops? We lived in Florida! I was appalled…and intrigued.

It took a few years but gradually I stopped shaving my legs every single time I showered. I shaved my armpits less frequently. I even began arguing the gender politics of hair and choice. My pussy? Meh, the hair was a helluva lot better than those screaming red bumps, and the only Bush I trusted was my own anyway, right?

Five years later, I sit here with trimmed hairy armpits, the occasional shaved leg, a black-haired stomach, a bush, and believe it or not, toe hairs. I realized that I don’t care. I shave when I want to, and most of the time, I don’t. If I appall someone because of my body hair, then I don’t care to have them in my life anyway.

Occasionally, I find myself becoming self-conscious of my body hair, checking myself in relation to who’s around me. I blame the patriarchy. I blame American society. Those razor ads, those derogatory statements. What’s with the equation to body hair and being “clean?” The self-consciousness is only occasionally, and each time it catches me off guard. It’s hard to shake off the ingrained societal standards.

This morning, when I realized it was No Shave November, and the hashtag (#NoShaveNovember) was trending on Twitter, I wasn’t uncomfortable. I was proud, and angry. Angry at the comments that were trending:

Not only are the comments sexist, but they’re heterosexist, and there’s sure a lot of internalized sexism going on. A lot of people assume that heterosexual women cannot have sex if they have body hair. Why are people made to feel so disgusted? And what about the racist remarks? Hairy people are not terrorists. It’s important to not be Islamaphobic.

Maybe people should start using Twitter to begin educating folks. I tweeted out to #NoShaveNovember that I don’t shave my armpits and encountered an empowering exchange that I wasn’t expecting:

I will retaliate against the patriarch’s beauty standards. I will shave nothing this month. I will embrace my hair, love my hair, and love me.

And as Alix Olson says… 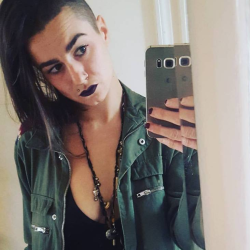 Latest posts by Justyn (see all)